“For the very 1st time, an Awakening Event (AWE) is held in Singapore. The decision was made after Henson realised the prophetic significance of 2018 and how the Lord is taking Archippus Awakening forward.”

When this was written for AWE2018 publicity, I was very aware of the significance of 2018 … I just didn’t know how significant it would be!

On 18 February, the Rev Dr Billy Graham passed away at 99 years of age. One month later, we lost one of our very own when the Rev Dr Rick Seaward died in a car accident in Brazil on 24 March. Just two weeks ago, on 27 April, the North Korean leader Kim Jong Un and South Korea’s President Moon Jae-in met in Panmunjom, ending the 68 year old Korean War. That opened the way for a Trump-Kim Summit. It has been announced that this historic summit will take place in Singapore on 12 June. This piece of news came after Pakatan Harapan, led by 92 year old Dr Mahathir, ended the more than six decade governance of Barisan Nasional. And all this amidst Prime Minister Netanyahu’s revelation that “Iran did not come clean about its nuclear program.” Just yesterday, Iran fired rockets at Israel. Who knows what will happen when US, to coincide with Israel’s 70th Anniversary, opens their embassy in Jerusalem on 15 May?

Quite clearly, 2018 is turning out to be an extremely significant year! And I believe it has only just begun. More will unfold and we must brace ourselves for what is coming up. 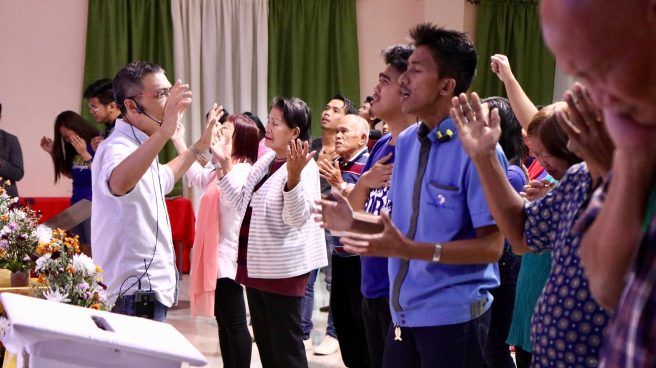 Against this backdrop, there is excitement as churches in our little island state have started to come together. 40 years after the Billy Graham Crusade in 1978, now even more significant with his passing, the Singapore Church is gathering momentum to pray, to prepare to proclaim, believing for a mighty harvest come May 2019. It’s heartening to see the various groups come together – National Council of Churches Singapore, Evangelical Fellowship Of Singapore, Love Singapore, and the most recent entity, The Alliance of Pentecostal-Charismatic Churches Singapore – with one cause … that we may fulfil our prophetic destiny as the Antioch of Asia.

Sounds really good. But where do I feature, if at all? Will Singapore fulfil her national destiny as Antioch of Asia if the National Stadium is filled next May? Respectfully, I don’t think so. In my humble opinion, “Singapore will fulfil her destiny as the Antioch of Asia when the saints are awakened and aligned to know and fulfil their God-given kingdom assignments.”

It is one thing to have churches fully filled. It is totally another when kingdom assignments are fulfilled by the saints. I am thrilled when souls are saved through the gospel of salvation. But we must not stop until saints live out that salvation through the gospel of the kingdom of God. And that’s what Archippus Awakening is all about! 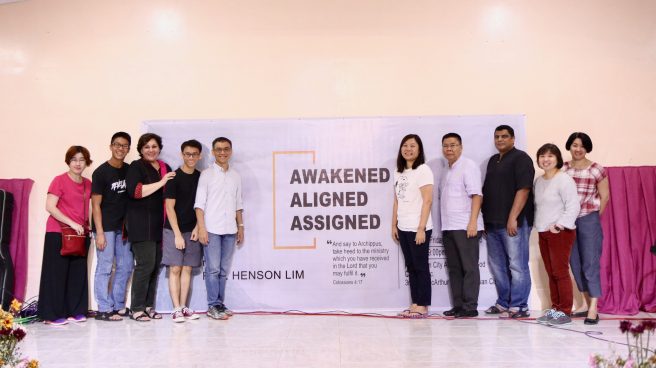 This week, I just returned from Philippines after conducting the “Awakened Aligned Assigned” Seminar in Kidapawan City with Team Archippus. This experience has given me a fresh conviction that the message of Archippus Awakening is not just for Singapore, but also for the nations. I am beginning to see that when the Lord told me to awaken the saints in the Body of Christ, He was not just referring to our Little Red Dot. If we are truly the Antioch of Asia, then our prayer must be that the saints in Asia will be awakened, aligned and assigned for Jesus and His kingdom! – starting with us in Singapore, each knowing and fulfilling our God-given kingdom assignments.

If this resonates with you, don’t just say, “Amen!” Determine to be counted amongst those who are faithfully fulfilling all the Lord has assigned. Through Archippus Awakening, I stand ready to serve you and the Body of Christ. Partner me that even more may be awakened, aligned and assigned!

The message of Archippus Awakening will be declared once again through another “Awakened Aligned Assigned” Seminar, this time in partnership with Woodlands Evangelical Free Church, on Saturday 30 June, 9am to 5pm. Admission is free, by registration. 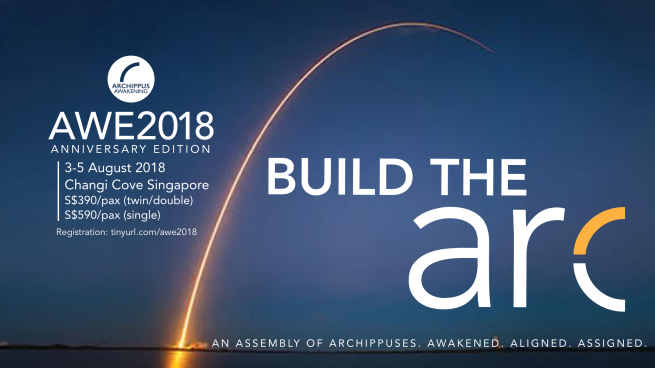 After one is awakened, the alignment check is next. That’s what we will focus on at AWE2018 (3-5 Aug) at Changi Cove. This Awakening Event is held in Singapore for reasons already mentioned above – the prophetic significance of 2018. Registration has been very encouraging and will close soon. To avoid disappointment, sign up today.

2018 is extremely significant and I don’t want to miss being a part of what the Lord is doing in and through Singapore. I expect more surprises up ahead, even some shaking. I don’t have all the answers and I am still figuring it out along the way. All I know is that as long as I remain aligned with Him, I will be rightly positioned to be assigned for Him.

Will you join me in this Archippian journey?

In His name and for His glory!
Henson