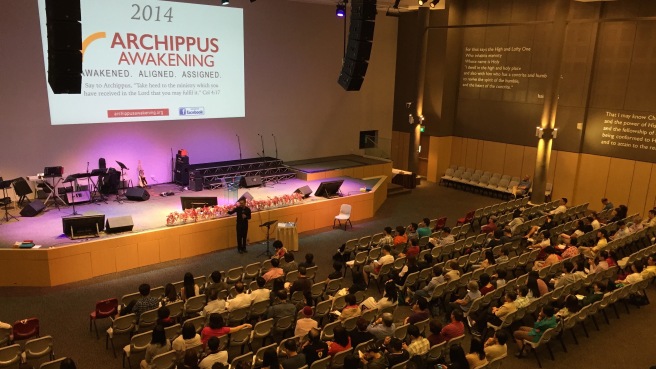 In my last update, I announced a personal conviction to go back to basics. Sounds rather straightforward, except that it is anything but. Truth be told, things change when we decide to revisit fundamentals, to reexamine tenets, and to reassess perspectives. And that was what happened in the past two months.

By nature, I am non-confrontational. This means that I am happy to live my life and not bother anyone else. I suppose this applies to my faith too where I am contented to do my little ministry stuff and be satisfied with that. After all, who am I, right?

One afternoon in January, a Facebook post from a very well-known pastor caught my attention. To my surprise, I felt a certain indignation in my system that I couldn’t shake off. Although I had other things to do, I found myself writing a post to address the point. Over the next week, “The Dangers of Biblical Illiteracy: Inspiration or Interpretation” went viral. I have always been convicted about the Word of God, but somehow, there was a certain push for me to make a bold statement about it on my blog. Soon after, in response to certain rude comments, I posted another article, “Biblical Interpretation: Dividing or Separating?”.

Then came the Madonna concert in Singapore. Other than a statement from the Catholic Church, and then the Anglican Church, it was pretty much business as usual. At the end of the day, it didn’t matter if Madonna performed the song, Holy Water, or not. As expressed in “Madonna Concert in Singapore: A Heart Issue”, it is primarily an issue of the heart – and for the Church, the hearts of believers. And to be clear, the absence of Rebel Heart in Singapore does not necessarily mean the presence of Radical Hearts for Jesus.

This week, there was a strong urge to write about “Possess Your Possessions”. With due respect to those who regard this as the declaration for the year, this phrase, especially recently, has been causing me considerable unease. I have heard many of such messages in the past and it had been alright. But in my present state of mind, something just didn’t sit right and it has become increasingly uncomfortable to not say anything about it.

I don’t fully understand what has happened, or is happening. I suppose, in going back to basics, I have just become a lot more sensitive to how much of what we do or say is so far from what the Lord desires of us as His people. Of course, I am thankful for His amazing grace. But at the same time, I will not compromise His absolute truth. I don’t have all the answers but I am taking time to process and check what I believe and understand, and how that plays out in real terms.

In Archippus Awakening language, it means to be awakened, aligned and assigned. It is fitting, therefore, as the one helming this ministry, that I myself should be duly awakened to the challenges coming against Christianity, and be prompted to check my own alignment by going back to basics, to reexamine my fundamentals. Only then will I have the right kingdom foundation as I go about fulfilling my God-given kingdom assignments. 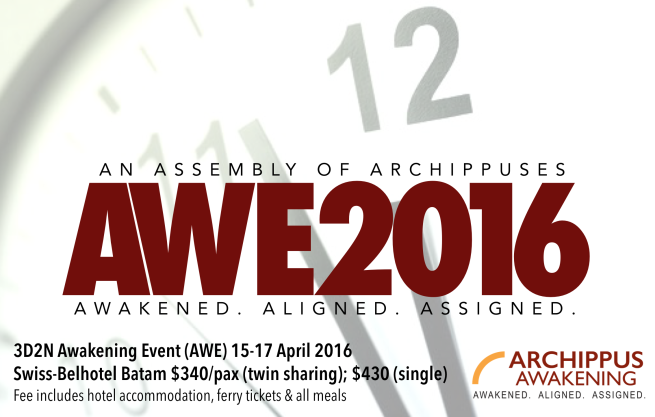 If your spiritual or church life has reached a plateau of sorts, I invite you to join me on this journey of being awakened, aligned and assigned for the Lord and His kingdom. To move forward, take the first step by going back to basics. And get ready to see things change as you realign to all the Lord has prepared for you!

If you don’t know what this looks like, prayerfully consider coming for AWE2016, our very own 3D2N Awakening Event 15-17 Apr [REGISTER]. Or join us at KINGDOM101 to receive kingdom teaching and foundation for your kingdom assignments (next sessions: 9 & 16 Mar). Have you read my book Say To Archippus yet? If you need a personal consultation, email me. Nothing thrills me more than to be able to help another Archippus know and fulfil his/her God-given kingdom assignment.

In His love and for His glory!
Henson Lim

Join 1,559 other subscribers
Follow One Day At A Time on WordPress.com