The last time I tried my hand at the flying trapeze was in Oct 2012, our first family vacation in Club Med Bintan. It looked fun and not too tiring. Just hold the bar and swing. Boy, was I mistaken!

When the safety harness was strapped on, I could hardly breathe because it was so tight! Then, the climb up to the ledge took quite a lot out of me. Oh, did I mention that the higher I got, the softer my legs became? After taking up position, I grabbed the bar and before I knew it, the instruction was given for me to jump off the ledge. As I swung down, I had to pay attention to when to pull up my knees and when to let go of the bar. Even getting off the bouncy safety net and back on the ground was tiring. By the time it was done, my entire body was trembling like jelly! 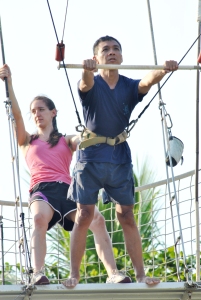 Don’t get me wrong. It is fun; but this ageing body can only take so much! This explains why I skipped this activity when we returned in Oct 2013. But just this week past, we found ourselves back at Club Med Bintan again. We picked it again to have a short break, to mark our 20th wedding anniversary. And since we were there, I thought it’d be good to give the trapeze another go.

My intention was just to experience the swing again, that’s all. After three rounds – pant! pant! ouch! – to my surprise, I was certified ready for “the catch”! You’ve got to be kidding, right?! Well, apparently, they weren’t. Egged on by my kids, I guess I couldn’t disappoint them. So, I rested for a while and gamely lined up for “the catch”.

My first two attempts failed. Our hands clipped but there was no catch. By this time, my legs weren’t just trembling; they were aching. My body was stiffening up, my ribs hurt from the tight harness and I wasn’t too sure if my hands could grip anything else, much less catch the catcher in mid-air! However, the thought of perhaps being able to do it pushed me on. One more time, one more time, … perhaps, just perhaps!

So up I climbed again, for the third and final attempt. Don’t think too much. Just feel it, go with the flow. Perched and ready, I waited for the instruction to jump off. Then it came … “Ready!” … “HUP!!!” I swung down and up, pulled my knees to my chest, hooked onto the bar, released my hands, kicked out my legs, stretched my body and I flew … how sweet it was to feel my hands slap and lock onto the catcher’s wrists and to hear the cheers from beneath!

I DID IT!!! I accomplished “the knee hang catch”. It didn’t matter that it was the most basic of catches; I still felt like a circus pro! If I had been much younger, I might have considered becoming a Club Med G.O. (gentil organisateur).

3 thoughts on “Club Med Bintan: I Believe I Can Fly!”