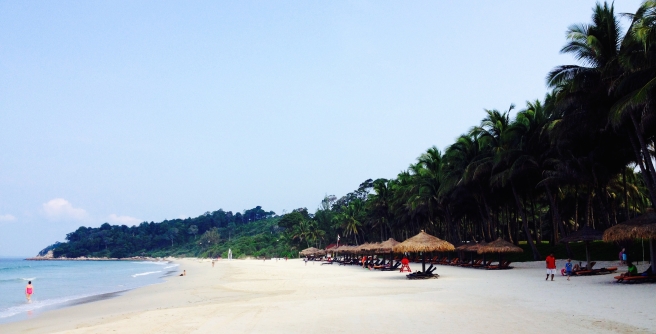 I can’t believe I didn’t blog about our little break to Club Med Bintan last year. Instead, I merely featured the photos in our November 2013 newsletter.

Well, this year, in deciding on a break for the Lim Tribe, we decided on Club Med Bintan again. The location is near enough and there are activities for our entire range of children. And best of all, it’s buffet after buffet so we don’t need to think about what to order or where to go for meals. When it’s time to eat, we simply grab the plates and load ’em up!

One year later, the four older ones were fairly independent and spent most of their time with the Teens Club. They made friends and enjoyed the various activities around Club Med – trapeze, kayaking, beach games, archery, table-tennis. Serene and I spent our time with the three younger ones – mostly at the pool and the beach. I managed to get in a session of squash with Aaron; and even went for a short mountain bike ride with David.

I had just recovered from a bad bout of flu so it took me a while to adjust and to settle in. Physically, I was very tired and drained. Emotionally and mentally, admittedly, my mind kept straying, thinking of the message I had to prepare and preach the moment I got back to Singapore. And a few days later, I would fly off to Kidapawan City, Philippines, to speak at a Prayer and Leadership Conference. Yes, that means at least another five messages to pin down. Even so, it was good that I was ‘forced’ to do nothing. It was not easy at all but it was definitely needful. My body and mind sure needed the rest and space. Unfortunately, by the time I finally settled down, it was time to head home and back to the grind of the work of ministry.

I’ve learnt my lesson though. The next time we plan a family break, it’s best not to schedule anything so closely after the break. Well, it’s easier said than done; especially when there is much development work to be done for a new ministry like Archippus Awakening and for one in itinerant ministry. Still, it’s a good reminder and consideration to keep in mind. It’s one thing to simply do it for the family and totally another to be there for them. I must confess the little momentary lapses. But as I look back, it was time and money well spent with my wife and children.