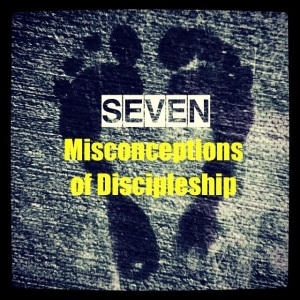 In offering scholarships to encourage school leaving youths to consider a career in the military, the recruitment office did not opt for the guts ‘n’ glory angle. Instead, they found that the following points proved more attractive and effective:

Catching up with a friend who signed on as a regular, we asked him if he was having a great time with all these promises. He answered, “Nonsense, la!” After all, no one said anything about being a soldier, tough training, and the possibility of dying in battle!

Is it not the same with Christianity? Very likely so, I’m afraid. Do we not advertise the good news, calling out to all, “Be a Christian and get your [fill in the blank]!”? Hardly, if anything is said about being a disciple of Jesus Christ. Little wonder then, that the Church has discovered a great disconnect between being a Christian and being a disciple.

As if a knee-jerk reaction (prompted by the Holy Spirit, I’m sure), there is now, of late, a sudden attention turned to discipleship. In the bookshops are so many titles and programmes on discipleship. Contained in every church mission statement is the word disciple or discipleship. Every church wants to be an intentional disciple-making church (IDMC). With the new buzzword of discipleship, another problem has arisen. Discipleship has become hip and cool; and in that, we have missed the mark again!

In preparing for a series on discipleship, I asked the Lord to show me afresh. I knew what I had been told and taught about discipleship. But my desire was to approach the Word without any presupposition or preconceived notions about discipleship. And the Lord gladly obliged. When He opened my eyes with a fresh revelation and understanding, it rocked whatever I had previously held on to. Oh my! What have I been teaching the people?

That’s what this series of articles will be about – the SEVEN misconceptions of discipleship that are prevalent in the Church, in the hearts and minds of God’s people.

Of the seven misconceptions, the first two are the most controversial. You may or may not agree with me, and that’s fine. Since sharing these, I’ve had different responses and it’s been interesting. I’ve also found that people like to remain in their comfort zones. And Christians presume many things without ever checking the Scriptures.

Therefore, if you disagree with anything, don’t disagree just because it doesn’t sound nice to you, goes against what you have been taught, or rocks your cushy Christian walk. Be like the Bereans who “searched the Scriptures daily to find out whether these things were so.” Finally, if we are still in disagreement, that is perfectly alright. My desire is not to win an argument about discipleship but that more would rise up to be faithful disciples of our Lord Jesus Christ! If this exercise provokes and spurs you towards this goal, I would have more than done my part.

2 thoughts on “Seven Misconceptions of Discipleship”